Enough boring facts, let’s get to the chase. The whole world is screaming at Israel for occupying Palestine. A treacherous story is told. The Zionists came into Palestine and with great cruelty ran the Palestinians out of their prosperous thousand year old State. If this were true I would probably be a pro Palestine supporter myself! How can one possible sit by and watch a nation that was stripped of their land by intruding forces?! Unfortunately for them and very fortunate for the people of Israel the story of this great land is quite different.

WHO ART THOU PALESTINE?

Let’s go back to the beginning. No, not to Abraham or Moses, I am not going to bore you with bible facts , which would be too easy. Let’s go back to when Palestine was first founded. No, it was not an Arab country or State; in fact it had absolutely nothing to do with the Arabs.

In 539 B.C. the Persians conquered the Babylonians. The Jewish Temple, destroyed by the Babylonians, was rebuilt (516 BC). Under Persian rule the Jewish state enjoyed considerable autonomy. Alexander the Great of Macedon, conquered the area in 333 BC His successors, the Ptolemies and Seleucids, contested for control. The attempt of the Seleucid Antiochus IV (Antiochus Epiphanes) to impose Hellenism brought a Jewish revolt under the Maccabees, who set up a new Jewish state in 142 BC The state lasted until 63 BC, when Pompey conquered the region for Rome.

When Jesus was around, the Jewish state was ruled by puppet kings of the Romans, the Herods. When the Jews revolted in 66 AD, the Romans destroyed the Temple in Jerusalem (70 AD). The Bar Kokba revolt between 132 and 135 AD was also suppressed, Jericho and Bethlehem were destroyed, and the Jews were barred from Jerusalem. The Roman Emperor Hadrian determined to wipe out the identity of Israel-Judah-Judea. Therefore, he took the name Palastina and imposed it on all the Land of Israel. At the same time, he changed the name of Jerusalem to Aelia Capitolina. The Romans killed many Jews and sold many more in slavery. Some of those who survived left the devastated country (and established Jewish communities throughout the Middle East) but there was never a complete abandonment of the Land of Israel.

It always makes me laugh that Arabs use the same name as the Romans with the same goal in mind; to try to strip the Jews of their natural right to the Land of Israel!

Let’s fast forward a bit to Islamic times. From 1517-1917 Turkey’s Ottoman Empire controlled a vast Arab empire, a portion of which is today Lebanon, Syria, and Palestine. During World War I (1914-1918), Turkey supported Germany.

When Germany was defeated, so were the Turks. In 1916 control of the southern portion of their Ottoman Empire was “mandated” to France and Britain under the Sykes-Picot Agreement, which divided the Arab region into zones of influence. Lebanon and Syria were assigned (mandated) to France… and “Palestine” (today’s Jordan, Israel and “West Bank”) was mandated to Great Britain.

Because no other peoples had ever established a national homeland in “Palestine” since the Jews were exiled 2,000 years before, the British “looked favorably” upon the creation of a Jewish National Homeland throughout ALL of Palestine. The Jews had already begun mass immigration into Palestine in the 1880’s in an effort to rid the land of swamps and malaria and prepare for the rebirth of Israel. This Jewish effort to revitalize the land attracted an equally large immigration of Arabs from neighboring areas who were drawn by employment opportunities and healthier living conditions. There was never any attempt to “rid” the area of what few indigenous Arabs there were or those Arab masses that immigrated into this area along with the Jews!

This is what Palestine looked like during the British Mandate.

The Balfour declaration of 1917 clearly states the Establishment of a Jewish homeland in the area known as Palestine. There was no split between the West and East bank of the Jordan River and the Jewish State was to be established on what was known as British Palestine, all of it.

Although Britain promised a Jewish homeland throughout the area known as Palestine His Majesty betrayed those promises in 1922.

In September 1922 the Council of the League of Nations recognized Transjordan as a state under the British Mandate and Transjordan memorandum excluded the territories east of the River Jordan from all of the provisions of the mandate dealing with Jewish settlement. The country remained under British supervision until 1946. What was promised to be the Jewish homeland of over 40,000 sq miles was now only 8,000 sq ml. This deceitful betrayal of the British Mandate towards the Jews faced absolutely no consequence. There was no Jewish uprising against the British, no terrorist attacks or murders. The Jews were happy with the 8000 sq. ml. homeland that was now promised to them. From 1946 the State known as Jordan occupied what was 85% of British Mandate Palestine. The West side of the Jordan River was left for the Jewish homeland.

Things could have ended there and we all could have lived happily ever after. However the Muslim population was not comfortable with Jews in the area. Over the next 20 years Arabs murdered raped and violently terrorized Jewish communities in the area of British Palestine. The most famous of the massacres took place in the City of Hebron. 67 Jews viciously murdered by Arab rioters. The murders took place with the help of axes, rocks and knives. The Jewish population of Hebron was violently liquidated for the holy city of Hebron. Several Women were raped by Muslim rioters and others beheaded.

Hebron Jew had his hand chopped off by an Arab axe

On November 29th, 1947 the General assembly of the UN adopted a plan to Partition the 15% of what was left of Palestine in order to create a SECOND Arab State in Palestine alongside a small Jewish one.

The UN’s second partition of Palestine left the Jewish homeland with a mini State alongside an Arab Jordan and a second Arab State on the Eastern side of the Jordan River.

This Partition plan was a terrible slap in the face to the Zionist movement. The Jewish State would be tiny and the holy cities Jerusalem and Hebron would not be included. The nation of Israel had waited two thousand years to come home and were not about to miss the opportunity to rebuild the Land of Israel. With mix feelings the Jews accepted the UN partition plan which left only 6% of what was originally promised to the Jews by the British. Not surprisingly it was the Arabs who refused the Partition Plan. This refusal was not about land or about refugees or walls or occupation. It was about the refusal of Arabs to accept a Jewish State, anywhere and any size.

Let there not be any misunderstanding. It was not the Palestinian nation, State or leadership that refused the Partition. It was the Arab League. There was never an Arab Palestinian State or Government in the Area known as Palestine. 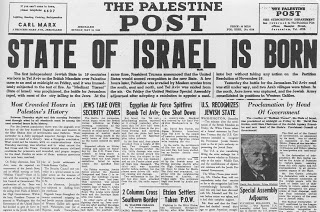 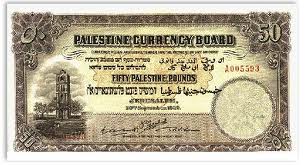 There were several official Palestinian objects which would give witness to

Unfortunately for those who call themselves Palestinian, all these items are JEWISH! The Palestine Post was a JEWISH newspaper as was the Bank of Palestine. In fact there is absoloutely no record of anything Arab that would hint to an Arab Palestine Government or State. That’s simply because there never was such an entity!

This flag did NOT exist officially till 1964
Egyptian born Yassar Arafat was the first ever Palestine Government official in history. This happened in 1964

DID ISRAEL EVER FIGHT THE PALESTINIANS?

Over the past 64 years of Israel’s existence she had to fight numerous wars. Neither of them involved a Palestinian army. After the 1948 Arab invasion of Israel and for the next 18 years the Arabs had control over the whole west bank, Gaza, Sinai and Jerusalem. In those 18 years there was never an attempt or even a request to declare a Palestinian State on the land conquered by the Arab armies.

This is a map of the Armistice lines after the 1948 Arab invasion of Israel. This is what is called the ‘GREEN LINE’. As you can see on the map the Green Line has nothing to do with a Palestinian State or rights of any kind.

Jerusalem was in the hand of Jordan, Gaza belonged to Egypt and the Golan Heights was part of Syria. Ignoring the fact that Israel liberated these areas after the Arab armies attacked again in 1967, the Palestinians have absolutely nothing to do with the GREEN LINE and Israel simply never occupied an Arab Palestine. The next time you chose to argue with me (Israel_shield) on twitter, or scream from the top of your lungs that Israel “Occupied” Palestine I am going to kindly ask you to check your history.

Palestinian propaganda has lied to the world long enough. One would expect of institutions like the UN to learn history and not allow the Arabs to fabricate it in order to intentionally hold on to an anti Israel opinions.

How To Destroy Anti Israel Propaganda CHEAT SHEET! (or if you just want to know the truth)